Commercial real estate on the northeast side of Cedar Rapids is booming with the recent completion of the new highway 100 extension that connects to highway 30 on the southwest side of the city. Edgewood Town Centre (ETC), a $50 million plus commercial development, is located at the crosshairs of Edgewood Road and highway 100 with over 65 acres of commercial lots that are for sale or build-to- suit. 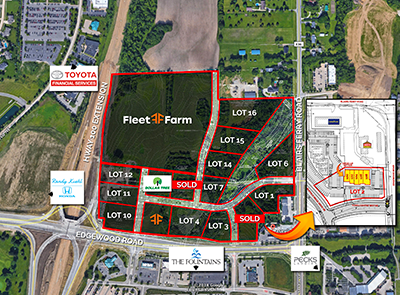 Several commercial projects within the development are already completed or underway, including the new Fleet Farm store with 200,000 sf of retail space and an accompanying Fleet Farm gas station just off Edgewood Road. Two multi-tenant commercial retail buildings are in the works within ETC and both will offer retail space for lease in the development, further adding to the commercial real estate growth in the area. Traffic counts in excess of 30,000 cars per day makes Edgewood Town Centre an attractive location for just about any type of commercial or retail business. Randy Kuehl Honda is relocating to the commercial lot just south of Edgewood Road and highway 100 in the 15-acre commercial development known as River Ridge Square. Construction is well underway on their new 25,000 sf dealership. Additionally, a 102 room Hilton Garden in and a residential project with 100 condos for lease are also under construction in River Ridge North bringing additional shoppers to the area.

The northeast side of Cedar Rapids has grown significantly over the last several years with the addition of commercial real estate for sale and for lease at The Fountains located just across Edgewood Road from ETC, and Peck’s Landing at the old Peck’s Nursery site. Since the flood of 2008, much of the new commercial and retail construction in Cedar Rapids has gone into the revitalization of the downtown area, but with the completion of highway 100, the city has seen a shift to the northeast side of town and ETC is the newest addition to the area. Surrounded by many regional and national office and retail brands such as Toyota Financial, McDonalds, Fleet Farm, Hy-Vee and Wal-Mart, ETC is positioned to be one of the most successful commercial developments in the area and creating a new northeast commercial hub.

We wanted to create an area where people can visit to shop, eat and work,” said Joe Ahmann, owner Ahmann Companies, developer of Edgewood Town Centre. “The opening of Fleet Farm as the anchor to the development is the first step in making that happen,” he said. 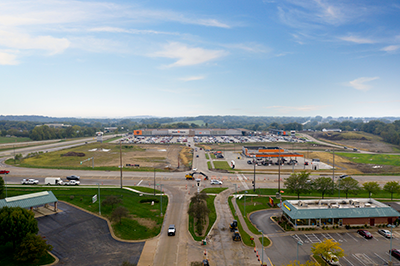 Fleet Farm opened in September of 2019 making it one of the biggest commercial retail stores on the northeast side of Cedar Rapids. Thousands of shoppers are drawn to the development by Fleet Farm making ETC an attractive option for any commercial and retail business considering Cedar Rapids. Paired with easy access and high visibility from highway 100, Edgewood Town Centre will be one of the busiest commercial and retail developments with commercial office, restaurant and retail space for sale or for lease in the city. There are also several pending leases, not yet announced, that will be revealed in the coming months.

“We are seeing a lot of activity from different commercial users,” said Craig Byers, Q4 Real Estate listing agent for the development. “We have several leases we will be announcing soon that will only increase the interest in the area,” he said.

For more information commercial lots for sale or commercial office/retail space for lease, Edgewood Town Centre, call 319-432-3339 or visit our website at www.Q4realestate.com. The free online text fixer can convert any document to a clean HTML code.

Jason is an Investment Property Strategist, Commercial Real Estate Broker, and Capital Fundraiser who works directly with commercial real estate buyers, sellers, landlords, tenants. He earned his degree from the University of Northern Iowa in Real Estate and Finance. Jason brings 15 years of experience in commercial investment real estate and has represented local investment property owners, multi-million-dollar institutions, and fundraised for partnerships. Jason joined the Pivot team in 2018 and has been busy leasing and selling properties for Ahmann Properties as well as representing other properties in the area markets.

Jason is married with two kids, Hollyce 3 ½ and Fritz 1 ½. In his spare time, he likes to spend time with family and friends and loves bicycling (Jason has done RAGBRAI 7 of last 10 years); he attends different Iowa sports, likes going to movies, and enjoys concerts/live music.