Downtown Cedar Rapids has always been home to unique, family-owned businesses, but after the historic flood of 2008, many Cedar Rapidan’s were forced to reinvent themselves and start over. A complete restart was the best option, the only option in many cases. With numerous businesses and homeowners completely devastated by this unprecedented destruction of beloved shops, restaurants, community areas, downtown Cedar Rapids was presented an opportunity for the community to show its true colors, in an even brighter fashion than before.

Shortly after this catastrophic event, our city came together and formulated an action plan not just to restore the city to its original form, but to elevate downtown Cedar Rapids to an even greater level. The revitalization of downtown and the Newbo area sparked new ideas for locally owned business as well new developments such as mixed-use commercial real estate suites combined with luxury rentals never seen before in downtown Cedar Rapids. The upside of what was to come reenergized the community. 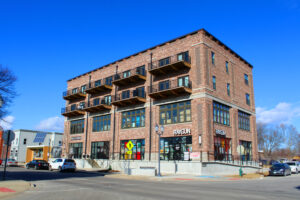 The City developed a vision for the area and were instrumental in providing the necessary funds needed to jump-start the area. Newbo Village is a testament to the commitment from the City and local builders to this determination. The Newbo City Market is the cornerstone of Newbo Village and is surrounded by both restored, historical buildings and new commercial real estate construction. The Newbo City Market opened its doors on October 27th, 2012 in the former Quality Chef building, previously an Iowa Steel and Iron warehouse, in over 18,000 square feet between 11th and 12th Avenues in what is now called Newbo Village.

Since the opening of Newbo City Market, the new development, the restoration of historical buildings and the re-opening of local businesses, Newbo Village has been an ongoing commercial real estate development boom. The Depot is located just behind the NewboCity Market and consists of four buildings with commercial real estate available for lease on the main floors with luxury residential Newbo Village apartment living above. The live/work concept at The Depot in Newbo Village is home to Collective Data, Involta, Office Evolution, Tallgrass Business Solutions, Carrier Acess and Robert Half with more to come. The Depot was built on what was a previously dirty site where commercial industrial company, Iowa Iron Works was located. The Depot gives residential apartment tenants the ability to live, work and play all in Newbo Village, and apartments on the upper levels are in high demand. Several restaurants are also located within walking distance of The Depot, and music venues and other crowd gathering events provide live entertainment in Newbo Village throughout the summer months. 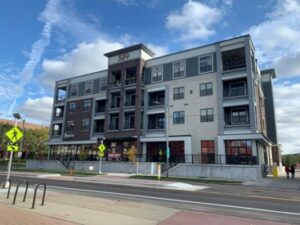 Renamed The National, the building at the corner of 12th Avenue and 3rd Street SE next to the 329 Building, is a historical building that was in desperate need of restoration after a fire destroyed the bar on the main floor in July of 2014.The National is now home to Brewhemia, a local café and bar, Caucho, an urban taco joint with many unique menu items, as well as an engineering company in the rear, HBK Engineering. The second and third floors of The National are now home to The Olympic Theatre, a wedding/party/live music venue further adding entertainment opportunities for visitors to the Newbo Village area. 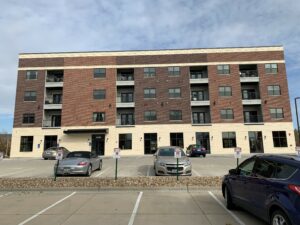